The term ECMO is an abbreviation for ExtraCorporeal Membrane Oxygenation.

The naming can create some confusion about the type and indications for use of this versatile system of acute life saving cardioplulmonary support.

ECMO was born in the early 70s 1 for the treatment of most severe pulmonary failure, these times referred to as “shock lung”. The idea was to gain time for the lungs to recover supporting the patient by oxygenating the venous blood, drained through cannulas inserted through peripheral vascular access, and pumping it back into the arterial system.

A blood pump is needed to push the venous blood through the capillaries of the oxygenator (a membrane oxygenator conceptually similar to the human lungs), which ensures the blood gas exchange (elimination of CO2 and O2 uptake). The blood flow needed for an adequate body oxygenation is approximately 80% of the cardiac output of the patient. The described veno-arterial (VA) ECMO circuit not only assures an adequate oxygenation, it supports also by default the circulatory system, similar to a heart -lung – machine used in open heart surgery (Fig. 1) 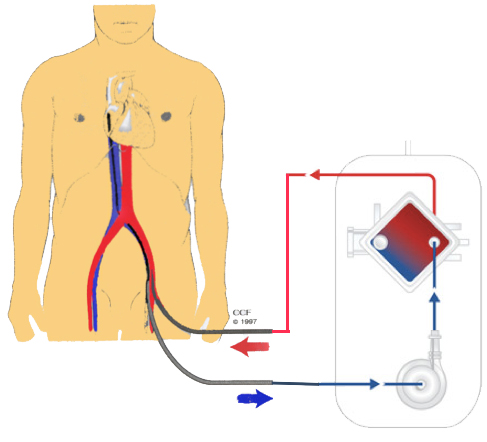 Currently, the main indication for VA – ECMO is salvage in severe cardiogenic shock with two intends:

A. Bridge to recovery (spontaneous or as a result of an intervention and / or pharmacological therapy)

B. Bridge to decision (gain time to evaluate and decide how to proceed)

Thanks to the minaturization of blood pumps and oxygenators and its potential for rapid transportation and deployment, the  VA – ECMO is used in our days as a versatile and rapidly deployed rescue system in all sorts of immediately life-threatening cardiocirculatory emergencies in and (rarely) also outside of the hospital with acceptable results 5-7.

Despite all technological progress (pumps, cannulas, oxygenators) and minaturization of the system, the potential of complications is high. First of all the risk of cannulation and distal limb ischemia, i.e. ischemia of the distal limb induced through the obstructive perfusion cannula inserted usually in the  femoral artery. Several techniques have been described to avoid this complication. Other complications include cerebral or other bleeding, excessive inflammatory response and left ventricular dilatation. If time permits, the preferred arterial cannulation site is the right subclavian artery (surgically exposed).

Analysis of the physiological mechanisms involved in VA – ECMO in ARDS revealed that subtotally bypassing the lungs (as it is done by deviating 80% of all venous return through the ECMO) was probably not contributing to their healing. These thoughts gave rise to another strategy:  the veno-venous (VV) ECMO (Fig. 2). 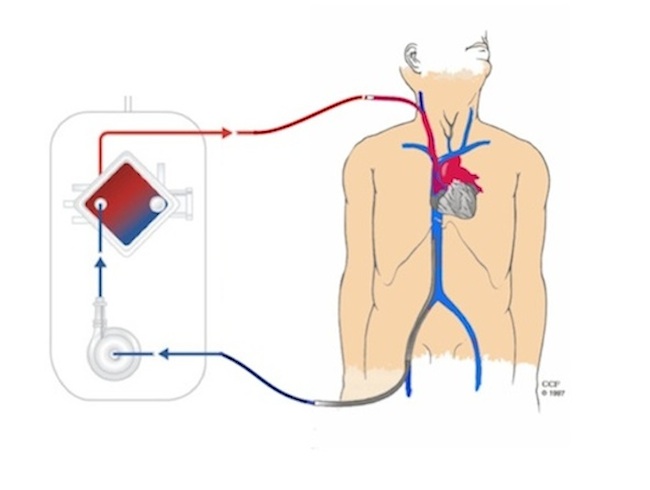 Venous blood is deviated and oxygenated by the same oxygenator but is pumped into a central vein (typically the superior vena cava). The patient’s heart pumps the already oxygenated blood through the lungs (which are now fully perfused and obviously not bypassed any more) and then to the rest of the body. The extracorporeal blood pump is needed only for pushing the venous blood through the oxygenator and determining the flow rate – it does not provide any direct circulatory support to the patient! In cases of severe hemodynamic instability, a VV – ECMO can be rapidly converted to a VA one.

The pump flows needed can vary from 80% of the patient’s cardiac output (i.e. 4 – 8 or more l/min depending on the patient’s general conditions and type of disease) to lower flows down to 1 l/min. The lungs are kept “at rest” and protected from injuries deriving from aggressive mechanical ventilation and oxygen toxicity.

Experienced centres reported good results in severe ARDS and VV – ECMO is now considered a valid option for the treatment of end-stage ARDS not responsive to maximal lung-protective ventilatory treatment 3. VV – ECMO gained worldwide attention in the treatment of the recent wave of viral pulmonary infections with the H1N1 viruses 4.

Perfusion times in VV – ECMO are rather long (weeks).

An overview of the results obtained after VA – or VV – ECMO support is given on the website of the International Registry of the ExtraCorporeal Life Support Organisation. In general, results for salvage from cardiogenic shock are worse than those of treatment of severe ARDS. Key factor for acceptable results is a good indication, especially with regard to the reversibility of the underlying condition.