by Stefanos Demertzis on 27 December 2013

From the official press release as distributed on December 20th, 2013:

CARMAT (FR0010907956, ALCAR), the designer and developer of the world’s most advanced total artificial heart project, providing an alternative for people suffering from end-stage heart failure, announces the first implantation of its artificial heart, as part of its feasibility study and in accordance with the approvals granted by the ANSM (Agence nationale de sécurité du médicament et des produits de santé, the French health authority) and the Comité de Protection des Personnes (ethics committee).

The procedure was performed on December 18, 2013 by the Georges Pompidou European Hospital team in Paris (France) – a world first.

The implantation went smoothly, with the prosthesis automatically providing blood flow at physiologic conditions. The patient is currently being monitored in the intensive care unit. He is awake and talks with his family.

“We are delighted with this first implant, although it is premature to draw conclusions given that a single implant has been performed and that we are in the early postoperative phase”, says Marcello Conviti, Chief Executive Officer of CARMAT.

The company was born 2008 based on a long-lasting cooperation between Prof. Alain Carpentier, a world-known French cardiac surgeon, inventor and pioneer of mitral valve reconstruction and the aeronautics and space engineering company MATRAS (now subsidiary of EADS – European Aerospace & Defence Systems). The collaboration was initiated with the aim to develop a total artificial heart as a permanent solution for end-stage biventricular (i.e. both main chambers of the heart affected) heart failure and as response to the growing scarcity of organs for transplantation.

It is a prosthetic replacement for the whole diseased heart, which in an open chest procedure – very similar to a heart transplant operation – is cut out of the body, leaving behind parts of the antechambers (atria). A special interface device with its sewing membrane is sewn at those atrial remains, the prosthetic heart is then clicked onto the interface device (Fig. 1). The connection to the aorta and the pulmonary artery is establish by sewing the two vascular prostheses already attached to the two outflow channels of the device. 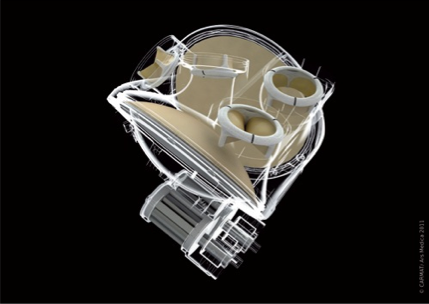 Fig. 2: Graphical representation of the internal components of CARMAT TAH. The external flexible bag and the actioning fluid are removed.

An integrated electronic device regulates how the prosthesis operates according to patient needs using information given by sensors and processed by a microprocessor.

The animation you can find here demonstrates this important property of the CARMAT TAH.

The power supply of the prosthetic heart is provided by lithium-ion batteries carried by the patient and connected to the device through cables to an external control console and to a plug positioned on the skull behind the ear of the patient (Fig. 3). 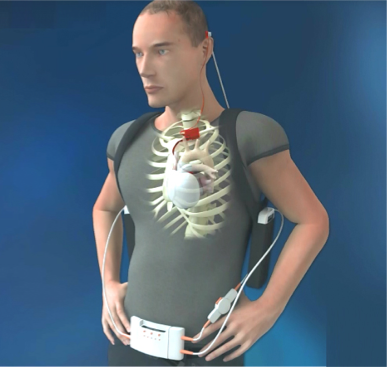 Fig. 3: Graphical representation of the CARMAT TAH system carried by the patient. The 2 batteries are visible under the armpits, the console is carried at the belt. The connection to the implanted device is on the skull behind the ear of the patient.

The aim of the development of the CARMAT – TAH was to create a true, full and permanent substitute of the patient’s heart. In explanation: we are not talking about a transient, intermediate solution (in other words what we are calling “bridge to transplantation”), we are talking about explanting the patient’s heavily diseased heart and replacing it definitively with the TAH. In another setting, which we will discuss further on, the intention of the TAH implantation could be described as treatment to “destination”.

The goal of CARMAT is set high: the TAH must achieve results comparable to those of cardiac transplantation at least in terms of quality of life, reliability and survival. Translated into crude numbers, this means patients have to improve clearly and measurably in clinical symptomatology and to achieve a 9-year survival of 50%.

All information regarding the CARMAT – TAH presented so far is publicly accessible in the official CARMAT site.

The word “artificial heart” is around for some time in the press and in the media. What is normally meant are highly sophisticated blood pumps, which are implanted in the body and connected with the patient’s own heart and the aorta. Those pumps take the blood from the left chamber of the heart and eject it into the aorta. Thereby the output generated by them equals or more frequently exceeds significantly the output of the patient’s own heart. They are therefore called more precisely “left ventricular assist devices (LVADs)”.

All currently implantable pumps produce a continuous (non pulsatile) blood flow. Their engineering concept is based on an impeller rotating at very high revelations per minute (usually from 4000 to 8000 rpm). Some of the LVADs currently in use are depicted in Fig. 4.

Their physiological concept ranges from partial to almost total support of the patient’s heart, which is obviously left in place and beats normally. Surprisingly enough, the human body deals better than initially expected with the continuous blood flow. Notice the difference here: the heart produces a pulsatile flow, palpable, audible and visible as our “pulse”, instead patients supported by a LVAD do not have a pulse!! (but do obviously have an adequate blood pressure!).

The LVADs are implanted normally as a “bridge to transplant”, meaning that the implanted patients are supported while actively waiting for a heart transplantation. As a consequence of the excellent performance and reliability of the modern LVADs, however, they are implanted more and more as a permanent solution, i.e. the patient is not in waiting status for a transplantation. This is called “destination treatment” or  better “life-long treatment” and is subject of ongoing research. The patients – candidates for “life-long treatment” do not have to fulfil the strict criteria for a transplant candidate (mainly with regard to age), a fact that opens this life-saving treatment to far more patients than a heart transplant.

It is important to know that a prerequisite for a LVAD to work is the good functioning of the right chamber of the heart. Otherwise the blood, which returns from the body to the heart, cannot be pumped through the lungs (for the exchange of CO2 and O2) and finally arrive to the left ventricle and the LVAD. A scarse right heart chamber on top of a scarse left chamber precludes the use of a LVAD.

This is where the concept of a bi-ventricular device comes in (BiVAD). The BiVADs are not completely implantable devices (with one exception) due to their big volume and complex driving pumps and electronics. They are extracorporeal devices connected with the big vessels and the heart chambers through special tubes, which are then brought outside the body to connect to the blood pumps. The intention for the use of these devices is clearly the “bridge to transplantation”. Some contemporary BiVADs are shown in Fig. 5. 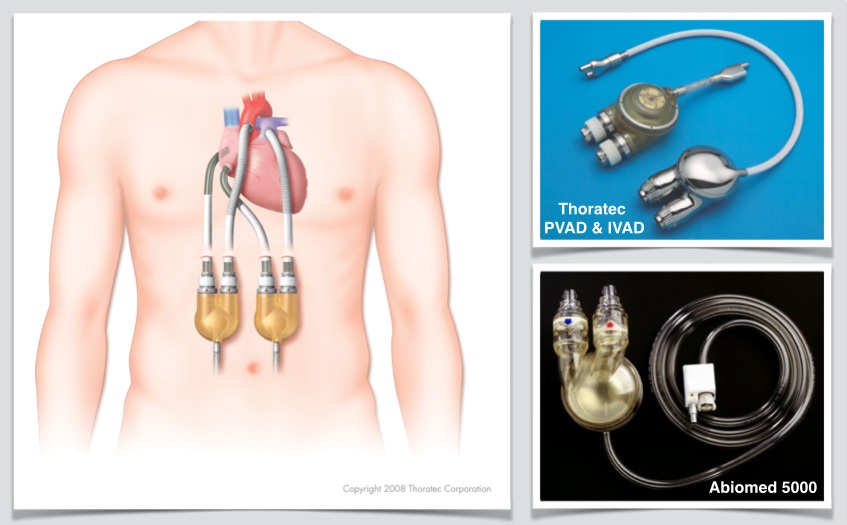 The exception mentioned in the last paragraph is the SynCardia TAH. It lies between the BiVADs and the modern TAH concept: it is actually the first TAH ever!

The Jarvik 7-TAH (this was its original name) was developed by the big pioneer Dr. Robert Jarvik in Salt Lake City, Utah, USA and reached worldwide attention as it was implanted to the dentist Dr. Barney Clark by the cardiac surgeon Dr. William DeVries back in 1984. This heroic dentist suffered from terminal heart failure as consequence of a viral infection of his heart muscle and he decided consciously to participate to this unprecedented human experiment, knowing that the chances for a long term survival were low. He survived 112 days and became symbol and inspiration for thousands of physicians and researchers. The abstract of the scientific paper describing this endeavour is here.

The core of the actual device, i.e. both ventricles with their inlet and outlet valves (old mechanical tilting disc valves) is the same as the original Jarvik-7 TAH. The driving force is air (therefore it is called a pneumatic device): an extracorporeal air compressor pushes and aspirates air, which moves the membranes within the ventricles which separate the air from the blood chambers (Fig. 6). This movement generates the pulsation, which moves blood forward (remark: in the CARMAT TAH the driving force comes from embedded miniaturised hydraulic motors, which move a special action fluid, which then moves the membranes). 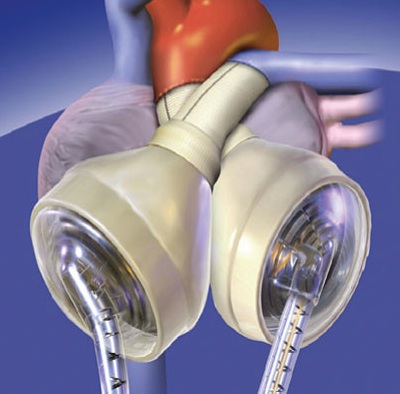 Fig. 6: Graphical representation of the SynCardia TAH (successor of the Jarvik-7 TAH, the first ever total artificial heart).

The intention for the use of the SynCardia TAH is “bridge to transplant”: it is not intended as a permanent solution. Despite the need for an extracorporeal air compressor (and the corresponding tubes which connect to the implanted device) patients can leave the hospital and live in their home while waiting for the transplantation. The results obtained in this difficult group of patients (remember, they suffer from end-stage biventricular failure!) are good (scientific paper here).

Hopefully, now you can perceive the major differences between what is generally called “artificial heart”. The only true artificial hearts are currently the SynCardia TAH, intended as “bridge to transplant” and the new CARMAT TAH intended as a permanent solution.

The CARMAT TAH first human implant is the first in a row of implants foreseen in a feasibility study protocol. The careful analysis of the obtained experience and results will be crucial for the future of the vision to permanently replace the diseased human heart by a sophisticated device. The CARMAT TAH seems to include “top notch” technology, its embedded sensors and electronics claim to be able to adapt dynamically to the patient’s needs. This means, the system would provide higher cardiac output when the patients is walking or climbing the stairs and adapt to lower cardiac output when the patient is recovering or sleeping. Together with the expected low potential for clot formation (thanks to the biological membranes and valves) and the claimed high durability and reliability, the expectations are high. My very hope is, all this will be confirmed by the clinical study initiated December 19th.

In any case, we are witnessing an amazing endeavour of admirable human, medical and technological dimensions. This is in my eyes the begin of a new era in the treatment of end-stage heart failure. I will be following it very closely and I promise to keep this blog (and you) updated.