Robotic surgery has been hitting the headlines for years. Notwithstanding, it is not widely understood what robotic surgery is really about and what are the benefits and pitfalls of this technology.

Nowadays, when we talk about robotic surgery we mean surgery performed with the da Vinci telemanipulator (Intuitive Surgical, Sunnyvale, CA, USA). It is not the sole robotic system available, but it is indeed the most advanced authority cleared surgical robot. It is successfully commercialized worldwide and dominates almost 100% of the market.

A. The surgeon’s console

B. The patient-side cart 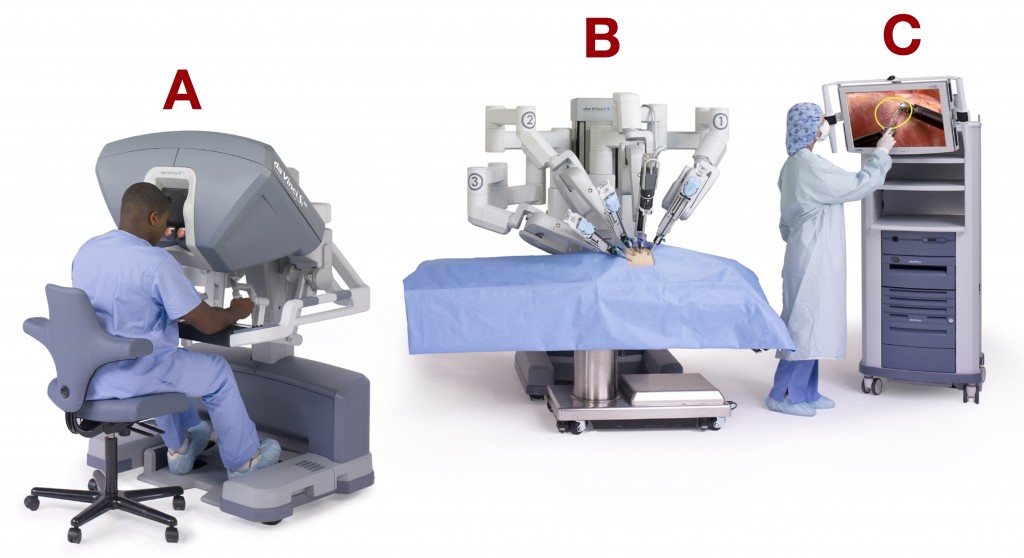 The surgeon sits at the remote console, resting his head on the visor that enables him to see 3D inside the patient’s body. The images are broadcasted by a dual mini camera endoscope inserted in the body of the patient. The system gets activated by sitting the head on the visor and only then it’s ready to receive the surgeon’s orders (Fig. 2).

Fig. 2: The author of the blog operating at the console of a da Vinci S. As an insert the actual image in this situation showing the take down of the left internal mammary artery (Inselspital, University Hospital Bern – 2010)

The orders are given by moving both hands that hold on to special handles and pedals. The surgeon’s movements, that are almost identical to those the surgeon himself would do if he held the usual surgical instruments, are transmitted and translated into movements of special instruments that are attached to the robot’s arms and inserted in the patient’s body.

Note: the robot does not operate independently! It translates and transmits the movements of the surgeon’s hands, who’s sitting at the console, to the instruments moving inside the patient’s body.

The assistant table-side surgeon performs important tasks synchronised with the main surgeon: firing and deploying medical devices, tying surgical knots through small service ports (cuts) and will be the first to react in case of an emergency.

What are the advantages of the robot?

The first one is the chance to carry out surgical interventions through tiny cuts (approx 1 cm). This is not, however,  the real novelty. Tiny cuts have been used for a rather long time now, through thoracoscopy, laparoscopy, arthroscopy and other similar techniques using cameras and endoscopic instruments.

There is one more major  difference: the segments of the robot’s instruments that are inside the patient’s body have joints, meaning that they are not as stiff as the endoscopic ones and can move even better than a human hand, as they are entirely placed inside the body (Fig. 3). 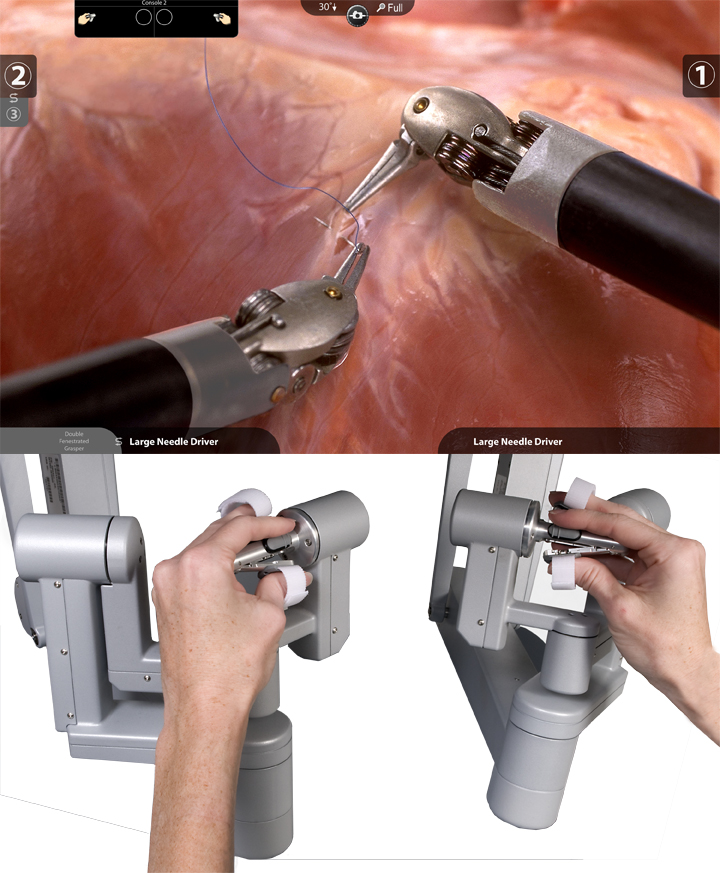 Fig. 3: Surgeon’s hands using the master controls to steer the EndoWrist instruments shown in the upper half of the picture (image downloaded from www.intuitivesurgical.com)

Imaging quality is the second advantage. The robot offers the surgeon a crisp high definition (HD) stereoscopic (meaning three-dimensionally) vision with an enlargement up to 5 times the original dimensions.

The third advantage is the system’s capacity to cancel the natural hands’ tremor of the surgeon! While it is true that a surgeon can well control his hands, at the same time a natural tremor can  occur. The robot’s software manages to “filter” these movements that are then transmitted to the instrument with no tremor whatsoever. A similar system helps military pilots to land on aircraft carriers, cancelling the pitching of the landing platform caused by the sea.

The advantages for the patients seem to be quite obvious and can be summed up in two words: added precision.

This ascertainment, however, does not automatically take us to a “better” operation. To certify an operation to be “better” other factors must be taken into account, too, such as the length of the operation, complications, possibilities to manage technical complications, and the (technical) final result of the intervention. As well as all of the above, the type of indications (i.e. for which form and typology of illness) and the number of patients suitable to this technique must be also carefully considered.

This is a complex assessment and is by far not so obvious: not every subtype of generally accepted surgeries  can be reasonably carried out by the robot and not every patient is suitable to be operated with this technique, even if his/her illness is be among those accepted.

The illnesses that can be treated with the use of robotics in cardiac surgery are coronary disease (i.e. Coronary Artery Bypass Grafting) and mitral valve diseases (other indications are rare).  It is noteworthy that all these illnesses can be also approached by using other mini-invasive options, without having to turn to the robot. It not this post’s purpose  to analyse each indication separately, this will be done in future posts in this blog.

As it has always been stressed in this blog, the individual consultation between patient, family, and cardiac surgeon is also in this case irreplaceable.

Generally speaking, in cardiac surgery and excepted a string of special constellations within each indication, there hasn’t been so far a clear superiority of the robotic intervention compared to the mini-invasive operation. On the other hand, for those specific constellations, leading groups have shown remarkably good results indicating a real benefit for the patient.

What are the drawbacks of the robot?

The daVinci robot is still quite bulky and takes up too much room around the patient. The patient is nearly hidden under the arms of the robot and not very accessible (Fig. 4). This aspect improved with the brand-new 4th generation of the da Vinci system (da Vinci Xi). 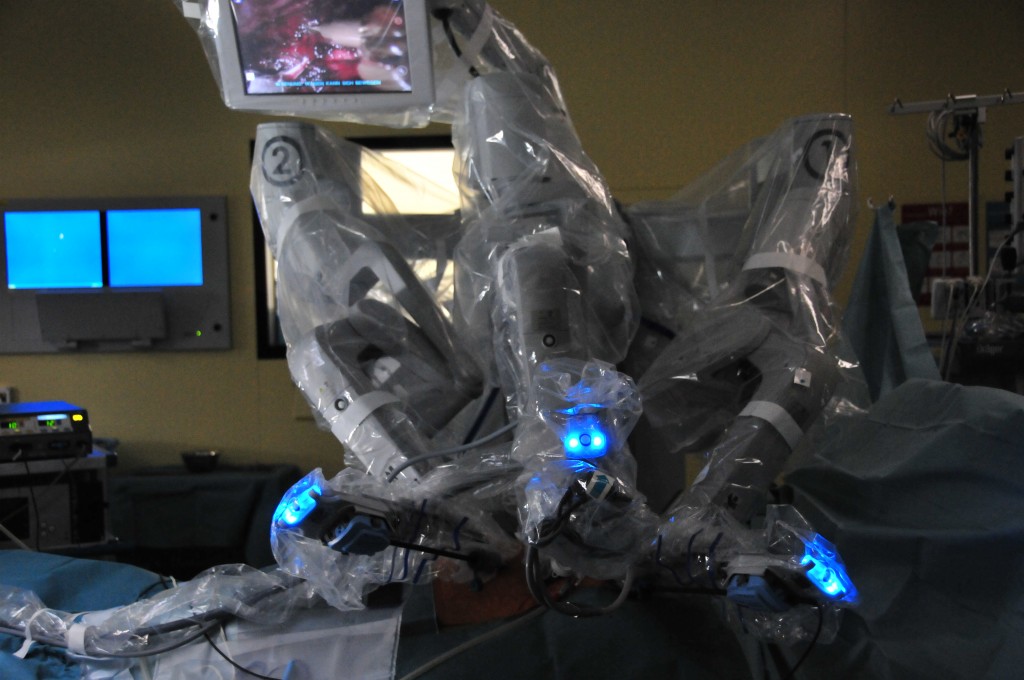 Should the operation be converted into an open surgery in case of an emergency (such as uncontrolled bleeding or a technical complication) the robot has first to be disconnected from the patient and pushed off before surgeons can intervene. This situation is part of the training but remains complex and technical timing has to be considered. Besides this aspect, mechanical conflicts can arise between the robot’s arms, meaning that one can prevent the other from working properly.

The technology implemented in the current da Vinci robots does not allow for tactile feedback. That means, that the quality of the tissues or the intensity and the strength of manoeuvrings can only be valued by the surgeon “translating” the optic impressions based on the own experience from “open” surgery. Simple gestures, such as knotting surgical sutures can result complex and difficult, meaning longer operating times that can be decisive for the intervention’s success.

The high purchasing price is another drawback of the current system.

The price of a full system (including the possibility of second remote console teaching) is approximately CHF 2 million to which other costs must be added, such as those of instruments that can only be used for up to 15 interventions and the yearly maintenance costs.

To evaluate the economics of the use of the robot in cardiac surgery all costs linked to the intervention  must be taken into account. This kind of evaluation has already been made and published by the robotic surgery team of Mayo Clinic: they demonstrated that, under the conditions created by this team, robotic surgery turns out to be cheaper than traditional surgery. The original paper is here.

The explanation of this surprising result lies in the organisation of the whole activity: the presence of an expert “heart team” (meaning an integrated approach to cardiac disease by an interdisciplinary group of experts and not only by one branch of the medicine or one doctor), the presence of a sufficient number of patients suited for this kind of surgery, the optimization of the efficacy of the robot’s use and favouring an early discharge from hospital (third postoperative day!).

Should these conditions not be met, robotic surgery remains very expensive.

The team approach, the disease and patient management and the efficiency in the use of the robot are crucial for a successful robotic surgery program. If not implemented correctly the project will fail:  more than half  of all da Vinci robots bought and installed are practically inactive! (Poston R, 13th ISMICS annual meeting, Prague, June 12-15, 2013).

Technology advances very quickly and several drawbacks of the current system have already been addressed by others. These robots, however, have not been marketed yet.

Among the novelties we can find thinner arms and effectors as well as instruments and systems that allow tactile feedback.

There are also newer advanced concepts in the development of miniaturized surgical robots with extremely flexible movements (snake-like) inside the patient’s body, which means a better options to reach targets difficult to approach. Experiments are being carried out with thin and flexible robots that travel along the big blood vessels, using them as “highways” to get inside the heart (as catheters used nowadays).

The development of all these technologies is breathtaking but are also very expensive and lengthy.

For the time being the market is totally ruled by one company, which also owns the majority of the world intellectual property. The lack of competitors and patent restrictions hinder a faster progress of the above mentioned innovations.  We can hope that in the next future new companies can join the club to enable the new extremely promising robotic technologies getting nearer to clinical use.