by Stefanos Demertzis on 7 August 2018

I very well remember my first experiences as a medical student in the operating room. I was ordered to stand in a corner with my back to the wall (just as the surgeon ordered), almost motionless because of the staff’s worry that I might touch and contaminate something sterile. I could only listen to the surgeon describing what he was doing. That was a humiliating experience and I was close to abandoning my goal of becoming a surgeon.

However, I persistently kept showing up in the OR and my repeated presence was no longer seen as a threat to sterility and I was slowly allowed to get closer and finally got to see more.
Getting scrubbed in and being allowed to be at the operating table was only permitted during the last year of medical school, when assisting the surgeon is actually part of the curriculum.

There is nothing extraordinary about this; on the contrary, this is currently the norm.

I believe, and I think we all agree that this cannot be considered a good approach to introduce someone to surgery and even less to teach surgery. Early in my surgical training, when I was scrubbed in as second or third assistant, I then realized that being able to actually see exactly what the surgeon was doing was was really only possible for a few kind of procedures. Surgical training was a mental jigsaw between theoretic preparation to the operation and interpretation of what could be picked up while watching: the surgeon is now placing valve sutures, probably on the right hand side. Less visible procedures, such as surgery of the mitral valve, remained “invisible” even to the first assistant.
Compared to back then, it is nowadays possible to watch more and more interventions on YouTube, the quality of the image and the immediacy are however far from being satisfactory.

Starting from my observation that during mini invasive surgeries the only person that can actually see anything is the surgeon himself, I came up with the idea of having a camera on the surgeon’s head, which could transmit wirelessly the images onto a screen in the OR, thus enabling everyone to watch what is happening.
We have tried all types of cameras available on the market (consumer cams, action cams, more specific cams), all of them with unsatisfactory results.
As such, and thanks to the generous support by Cardiocentro Ticino, we projected our own camera that was designed to fulfill some basic “must haves”: high definition video quality, large depth of field to have the whole operating site in focus and wireless transmission.

In this project we arrived to a functioning prototype, which proved the feasibility of the idea. However, the technical challenges that still needed to be solved were beyond our internal capabilities, which was why the idea was entrusted to an investor and partner.
The new team re-developed the camera from scratch introducing cutting-edge technology and after two years of technical development and considerable investments, a truly unique product was born.
What remained from my initial idea is the basic criteria that have been enriched by other tools that allow us to achieve a much higher level of teaching, training and surgical documentation.

At this moment in time, I declare not to have any conflict of interest and / or financial and / or fringe benefits from this project other than the enthusiasm and satisfaction of seeing an awesome product being born from an idea of my own.

This system can radically change the teaching in surgery. Hereafter a few examples:

•  The students  / post-graduate students and/or any interested colleague are actually present in the OR but primarily look at the large Full- HD screen that transmits the operator’s field of vision (this is technically called “casting”). Interacting with the operator is now easier for everyone, including the OR staff and the perfusionist handling the heart-lung machine.
•  A group of students / post-graduate students / colleagues can follow the surgery from a big screen in a meeting room outside of the OR in real time. A surgeon explains what is happening and during the less demanding parts can even teach.
•  Students and /or accredited trainees have access privileges to a secured website where they can choose whether to follow surgeries in real time or watch recorded surgeries. 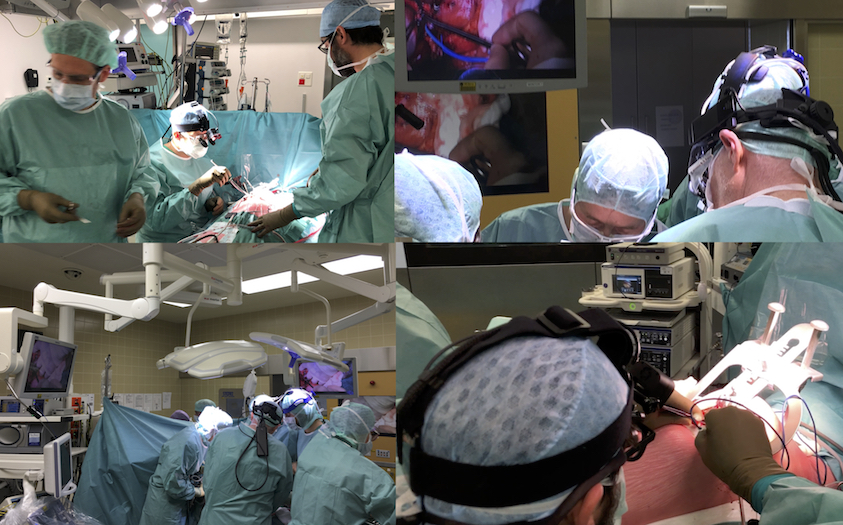 Demonstrating, teaching and documenting in the OR with the Titan-2 head cam.

In my opinion this system is the most significant teaching development for surgery ever since the historical dome shaped amphitheater which are still found in some hospitals (also used in television series such as Grey’s Anatomy). You can find more details on the system here: www.cinvivo.com
Duly used, it can be a great asset for young students and doctors – who normally have small chances to see surgeries – to get to know surgeries in general and also more specifically cardiac surgery.
Even training for skilled surgeons can benefit from sharing the surgeon’s field of vision.

This system is obviously very helpful when divulging surgeries, both presenting during congresses and conferences and through websites.
Clearly editing skills are needed to be able to show such recordings. This takes up a lot of time, requires technical skills and interests that go well beyond usual chores. In my personal experience I can say that this part can be very rewarding! I edit recordings by myself, on my Mac Book Pro with Final Cut Pro X, should you need further details do not hesitate to contact me.
We are entering a new era of surgical teaching and training. I am very interested in receiving and discussing your comments.